Elida is a Swedish all-Christian organization, "Sailing for Jesus" with the goal of spreading the message about Jesus Christ via a sailing boat with the same name. Summertime it tours along the Swedish west coast with singing and music and the Christian message through people's life stories and testimonies. 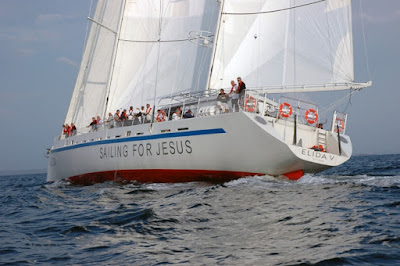 From 11-18 of October the ship is in the port of Herzliya in Israel. The crew has pro-Israel Christians agenda and a supporter of Israel's current government.

"The Elida will be met by the Israeli navy and a flotilla of Israeli yachts who will escort her into Herzlia Marina on Thursday afternoon. An official welcoming ceremony organised by the Israeli Foreign Ministry with the Swedish Embassy and hosted by Herzlia Municipality which will include a children's choir."   see more in Elida facebook

“ In the Middle East there is but one nation opening its ports for a ship like Elida, marked with the logo “Sailing for Jesus” – the state of Israel.

No country is perfect, no country is without problems and challenges. But as a Swede I can observe Israel from the outside and see what a “lighthouse” this nation constitutes for democracy and human rights in an environment where these rights otherwise have little merit.

In addition, seeing how our own ( Sweden) current government have made multiple decisions and statements violating Israel, as the only democracy in the Middle East, we wish to send a signal that there are actually Swedes who are of another opinion. “ From Elida webbsite


When I read about their journey, they have a very naive view of Israel seem completely unaware of the ongoing occupation.

Who will inform them about reality? I suggest you Christians in Israel and Palestine and have the opportunity visits the ship in the port of Herzliya and tell them about your life , and invites the crew to your churches and communities and how it is to live under Israeli occupation.